200 billion evaporated overnight, why did Tesla's sales drop in May?

As soon as the news was announced, Tesla's share price immediately flash crash, as of the close of trading, Tesla fell more than 5%, the market value evaporated 30.9.56 billion U.S. dollars, about 198.2 billion yuan. 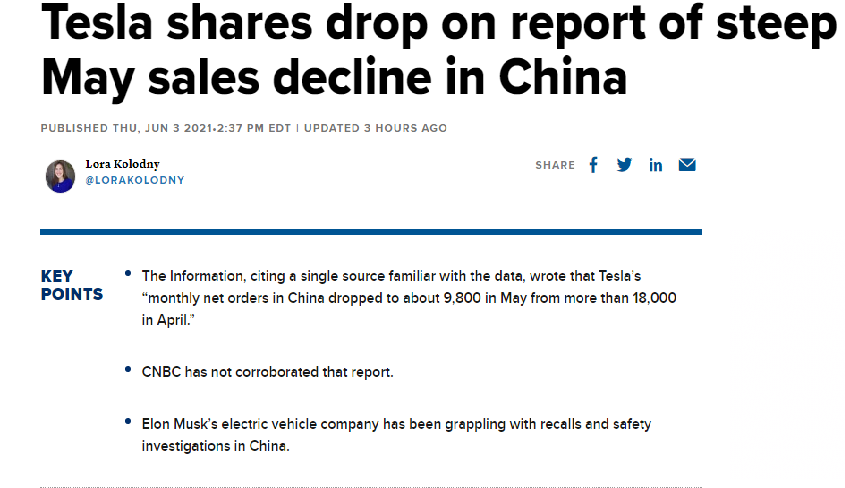 In 2019, Tesla broke ground on the Shanghai factory, the company's first factory outside the United States, when Tesla received strong support from the Shanghai government. 2020 in Shanghai to achieve domestic production, Tesla in the Chinese market all the way, 2020 sales of 139,000 units, the market share of electric vehicles to 10%; 2021 quarter delivery of 69,000 units, the market share of 13%. In just one year's time, the company has taken the number one position in China's electric vehicle industry, which is a great success.

However, in the past few months, Chinese regulators have taken a tougher stance on Tesla due to safety issues with the vehicles and an increase in consumer complaints, causing the company's sales in China to decline significantly. And at the level of public opinion, news of a Tesla traffic accident spreads through the circle of friends on an almost daily basis. There have also been reports that some state agencies have issued internal circulars asking their staff not to buy Tesla models and, if they have, to transfer them to non-state officials as soon as possible. In addition, the reputation of Tesla has fallen into disrepute as news of individual parking bans have come out from time to time.

Public pressure and safety incidents have had a direct impact on Tesla's sales in the Chinese market. Tesla's sales in China in April this year have seen a significant drop from the previous year. According to data from the China Association of Automobile Manufacturers, Tesla's wholesale sales in China in April this year were 25,845 units, a decline of more than 27% from the previous year.

According to statistics, in April, Tesla's position as the world's number one electric car giant seems to have been lost, with its global market share falling from 29% in March all the way to 11% in April. In addition to the big drop in sales in China, its European market is also struggling. Tesla's Model 3 deliveries in Europe fell by 95% in April from a year earlier to just 1,244 units.

According to a new report by Credit Suisse analyst Dan Levy, this was Tesla's worst monthly global market share performance since January 2019.

The report also noted that global electric car sales accounted for 6.1 percent of total global new car sales in April, well above the 4.4 percent level in 2020. In the United States, Tesla's market share fell from 72 percent in March to 55 percent in April.

Although Tesla is still leading the US market, no one knows how long this trend will continue. The company is still facing stiff competition from traditional carmakers and is also dealing with the removal of features and price rebound in its models.

Previous: Sinopec and PetroChina accelerate transformation and enter the electric vehicle sector Globalization Trend/Next:Toyota at the forefront of low carbon mobility in the world
Related Industry News
Our Customers 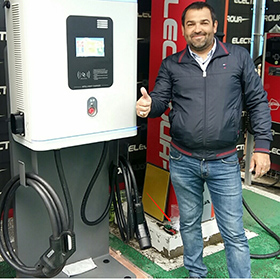